How does a community respond to the heart-breaking deaths of several of its young people in one year? Jen Waller McDevitt and her husband, Dave McDevitt, hope that a new initiative called #Burnsvillestrong can turn grief into positive actions.

Dave McDevitt and Jen Waller McDevitt Jen and Dave have been teachers, coaches and activity advisors at Burnsville High School since 1999. Dave grew up in Burnsville and his mother was a long-time teacher in Burnsville-Eagan-Savage School District 191. The couple now lives in Burnsville with their three children who attend Gideon Pond Elementary in Burnsville.

"To say that our family is invested in this community would be an understatement," said Jen. "We love our community and have continuously supported it throughout the years."

That's why the deaths of the nine current students or recent graduates over the past year have affected them so much. And they're not the only ones.

"The Burnsville community has been hit hard with too many young people’s deaths," said Jen. "Now we feel it is more important than ever to unite as a community around our kids."

The hashtag #Burnsvillestrong was started by students about a year ago after the first two deaths and has gained in popularity through social media.

Dave, Jen and others want to build upon it. They hope that through the #Burnsvillestrong initative, the youth of Burnsville will know that this is a city that supports and encourages their well-being and success.

"Let’s remind our children that we, the adults throughout Burnsville, are behind them 100%," said Jen. "The #Burnsvillestrong goal is to inspire the entire community of Burnsville to support one another and foster positivity throughout the good times as well as times of adversity."

The couple is reaching out to city leaders, local businesses, civic organizations and District 191 students, families and staff members inviting them to join the movement.

A Twitter feed is in place and a Facebook page and website are being created. Bumper stickers and t-shirts are also being made to make #Burnsvillestrong more visible. Plans are underway for a community event. The couple predicts this initiative will expand in many ways once students and more community members become involved.

"We want #Burnsvillestrong to represent remembrance and positive pride throughout Burnsville," said Dave. "There are so many great things about our amazing community -- we want to push the positives."

My husband and I have been teachers, coaches, and advisors at Burnsville High School since 1999, residents since 2004, and parents in the district since 2009. He grew up in Burnsville, and his mom taught in ISD 191 for many years. To say that our family is invested in this community would be an understatement. We love our community and have continuously supported it throughout the years. As you know, in just over a year, the Burnsville community has been hit hard with too many young people’s deaths. Through these very trying times, #Burnsvillestrong has become a very popular hash tag via social media.

This community’s young people are hurting and want to remember those we’ve lost, as well as how fortunate they feel to live in this amazing city, and this catch phrase is one way they’re doing it in a positive manner. Now we feel it is time to unite as a community around our kids. Through the #Burnsvillestrong initative, the youth of Burnsville will know that we really are a city of strength and good. We hope to not only remember those we’ve lost through terrible accidents, but remember to make good decisions ourselves. Let’s remind our youth that we, the adults throughout Burnsville, want them to know we are behind them 100%.

The #Burnsvillestrong goal is to inspire the entire community of Burnsville to support one another and foster positivity throughout the good times as well as times of adversity. How can you help? We not only want but NEED to be visual throughout the community. Just as the American flag represents patriotism and freedom, we want #Burnsvillestrong to represent remembrance and positive pride throughout Burnsville. Will you join in support of the #Burnsvillestrong initiative? We will soon have bumper stickers and t-shirts. But to be truly visible, we want posters and signs in the city hall, every local business, Rotary, Lions’ Club, Chamber, churches, etc. We believe Burnsville will and can remain strong despite adversity. We believe the youth of Burnsville need to see and feel this coming from everyone around them.

Please contact us to set up a time to meet or discuss how you can partner with the #Burnsvillestrong initiative. I look forward to hearing from you. Sincerely, Jen Waller McDevitt

#Burnsville Strong In the News

Bring me the News 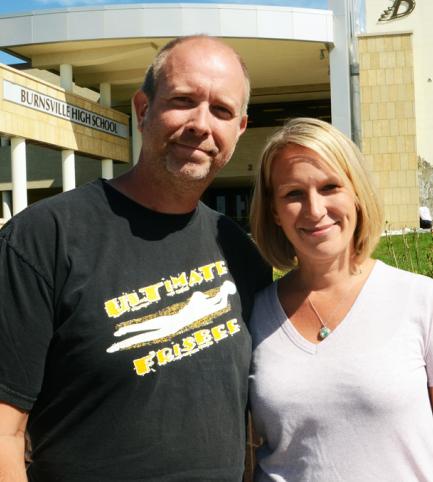